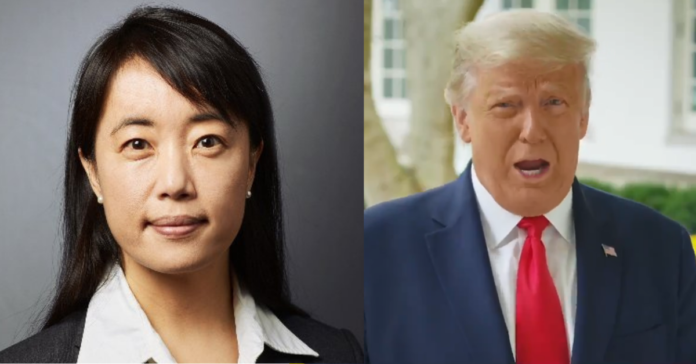 A psychiatrist at Yale University who is a media darling for repeatedly trashing Trump is in hot water over an anti-Trump tweet. She is also the president of the World Mental Health Coalition.

Brandy Lee has deleted the tweet suggesting Trump was worse than Hitler after massive backlash but remember – it is not her fault.

The media and those whose agenda it was to take down Trump are responsible for the cartoon villain fascist image that too many Americans have of Trump. This is basically the culmination of a four-year smear job.

When this election is over they won’t change but the media really needs to re-think their entire existence and business model.

“Donald Trump is not an Adolf Hitler,” Bandy X. Lee tweeted. “At least Hitler improved the daily life of his followers, had discipline, and required more of himself to gain the respect of his followers. Even with the same pathology, there are varying degrees of competence.”

After she caved and took it down she tweeted, “If we cannot look at the parallels in history and learn from them, we are truly poised to repeat it,” Lee said. “I say so in heartbreak for the 11+ million lives lost, not in their minimization (currently, we are looking at 7 billion at risk, without exaggeration if we soberly thought of it).”

From The Washington Examiner:

Lee edited 2017 New York Times bestselling book The Dangerous Case of Donald Trump, which contains essays from 27 mental health professionals who argue Trump is a “clear and present danger” and that his mental health makes him “incapable of competently discharging the duties of President of the United States.”

Lee has a long history of being critical of Trump, going as far as calling his administration a “violent regime” and comparing his supporters to those who supported Hitler in Nazi Germany.

After facing backlash for the tweet, Lee deleted it and posted an explanation.

“Okay, I have taken it down, since it has upset so many people and was not provoking thought but the opposite,” Lee said. “Of note, my statement was about how little Donald Trump believes he needs to do to retain his followership, NOT to minimize Adolf Hitler’s atrocities.”

If we cannot look at parallels in history and learn from them, we are truly poised to repeat it. I say so in heartbreak for the 11+ million lives lost, not in their minimization (currently, we are looking at 7 billion at risk, without exaggeration if we soberly thought of it).

Ronna McDaniel “There will be a surge of votes for Trump on Election Day, and the data from the Scranton rally proves it”