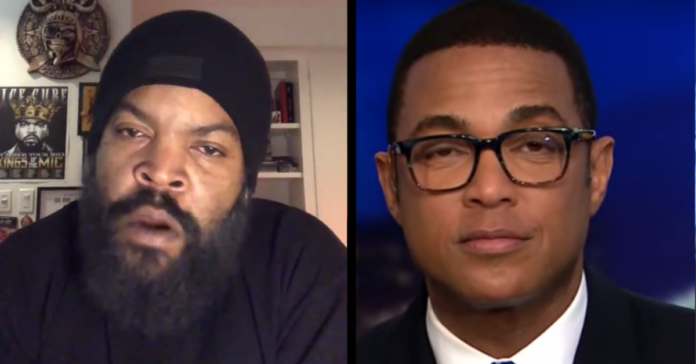 Rapper and actor Ice Cube ripped Don Lemon and said he was in fact rebooked on CNN after he trashed the network for canceling a scheduled appearance on CNN after word leaked that he worked with the Trump administration on the “Platinum Plan,” to help black communities prosper.

“Rebooked on Cuomo Prime Time tonight. The truth will set you free,” he announced Friday.

“Thank you Chris Prime Time Cuomo, you’re a man of your word,” Ice Cube added. Then he settled a score and issued a challenge to a different CNN host.

The rapper went after Don Lemon hinting the Lemon was the one who got his last appearance canceled by the network.

Earlier in the day Ice Cube revealed that his scheduled appearance on CNN was canceled after word got out he was working with the Trump administration on a plan to help minority communities. He said CNN “can’t handle the truth.”

“So the POWERS that be cancelled my interview on Cuomo Prime Time tonight.”

“I’ve actually been banned from CNN for a few months so I was surprised they even asked,” he added.

“But it seems like they can’t handle the truth.”

Rebooked on @CuomoPrimeTime tonight. The truth will set you free.

Thank you Chris @CuomoPrimeTime you’re a man of your word. @donlemon that was some punks ass shit you just did. If you have any balls. I need to be on your show Monday night at 10pm. I’ll be ready.

Rush provides somber update on his condition, says “the scans did show some progression of cancer” and “you do what you can to prolong life”