“An eyesore no more” – Conservative Media 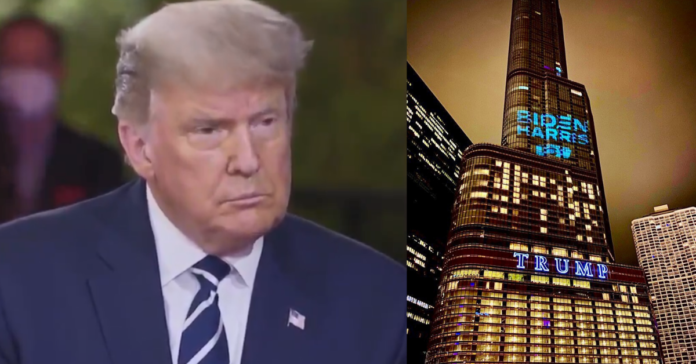 Members of the United Steelworkers union targeted Trump Tower in Chicago with their traveling “bat light” they use to project their endorsement of Joe Biden onto buildings.

The words “Biden-Harris” lit up the side of Trump Tower with blue letters. The group posted to social media with the caption:

“We didn’t?! We did!! And it felt so good. (The most action that sad, half-empty building’s seen in a while.) Good morning Chicago. An eyesore no more.”

“This election is obviously very important and there’s a lot at stake for workers,” said Jess Kamm Broomell, spokeswoman for United Steelworkers who were behind the stunt.

“A lot of issues facing working people are on the ballot this year: Affordable healthcare… retirement security, workers’ rights, health and safety on the job, all of these things are at stake.”

The “bat light,” is what the union calls it and it travels with a group of four women who shine messages in support of Biden in states across America.

This is a new initiative for the group, just one month old and they have hit Pennsylvania, Michigan, Ohio, Wisconsin and Minnesota.

“The bat light project was born out of our existing political work, we wanted to be able to spread the message in a way that was COVID-friendly,” Broomell said.

“Mostly to let people know how important this election is, how important it is to make a plan to vote and start some conversations about these really important issues facing workers.”

We didn’t?! We did!! And it felt so good. (The most action that sad, half-empty building’s seen in a while.) Good morning Chicago. 🦇🔦 #USWBatLight #VOTE #BidenHarris2020 pic.twitter.com/YBy1mYk36v

“Stick to your guns, I’m voting for Donald Trump because he’s not a politician” – Conservative Media